Covalent bonds are formed when electrons are shared between atoms. Hydrogen, for example, can share one pair of electrons with another atom, so we say that it forms one bond. Similarly, oxygen forms two, nitrogen usually forms three, and carbon forms four. (Remember the "HONC" rule...H=1, O=2, N=3, C=4, but note that unstable molecules can form, creating exceptions.) The ratios of atoms in various molecules are expressed by their chemical formulas. For example, "H2O" represents water, and "C6H12O6" represents glucose. However, this is only part of the story. In biology, the shape of a molcule is often just as important as its chemical formula. Enzymes, for example, need a precise 3-dimensional fit to their substrates, just like a baseball and a well-worn outfielder's glove. In this investigation we will attempt to construct molecular models of some common substances from biology. In several cases, unusual properties will emerge that couldn't have been predicted from the flat projections that are usually drawn on paper.

If you do this lesson in person, use a molecule building kit.

We will work with wooden balls to represent atoms. Hydrogens (white or yellow) have one hole, oxygens (red) have two holes, nitrogens (blue) have three holes, and carbons (grey) have four holes. Use wooden dowels for single bonds, and flexible plastic tubing for double bonds. Each hole must be filled, each "bond" must be capped. For some of the larger examples, it may be necessary to share pieces with other groups.

Experiment with each of the following examples until you are satisfied that you have the one correct solution.

On a separate piece of paper, draw each of these examples as a 3-D shape, not just as a stick figure. Color-code each sketch as needed.

If you do this lesson online, use the Build a Molecule app to construct the molecules listed below. You will be moving from simpler to more complex structures. Use the Larger Molecules tab, and click the yellow arrows to move between atom kits to find one that has all the materials you'll need for each structure. Just drag and drop atoms near each other and a bond will form. Click between atoms to break a bond. Throw unneeded pieces back in the tray and they will sort themselves out. Click Refill Kit to clear the entire screen. The teachers' guide has more instructions on using the tool, but it's fairly intuitive and you can probably figure it out after a few minutes of exploring. 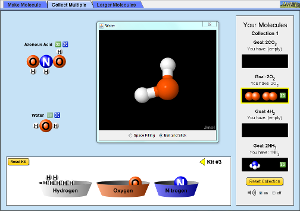 Click on the image or this link to start building molecules.

(First, try to build them using just the hints below. Then, check your work by clicking the link.)

Explore the Periodic Table of the elements with your Mac or use this online periodic table. For a more powerful Molecule Builder, try Jmol.